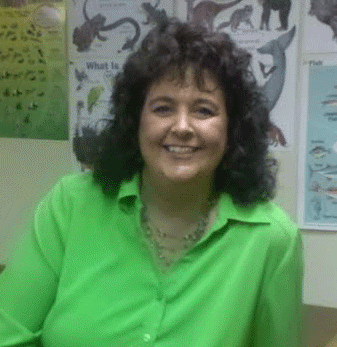 Our own Mrs. Tomm "K12 Spotlight" by NBC LEARN

Some people stumble into teaching as a second career. Others discover it as a possibility while they are in college. But the true diehards are people who know from a young age that teaching is going to be their lifelong passion. That is what happened to Tracy Tromm, a middle school teacher at Havana Junior High School in Havana, Illinois. From an early age, she distinctively remembers her mom telling her that one day she was going to grow up to be a teacher. Even after 27 years in education, she’s still having way too much fun to even think about retirement. While she started off as a middle school math teacher, she has spent the latter portion of her career teaching middle school science.

“I became a math teacher after I had a high school math teacher that went above and beyond and made sure that I did well in math,” says Tomm. “Science goes hand in hand with math. Science ties in everything. It is neat to be able to help kids see how what they are doing relates to everything else.”

To help make those connections, Tomm relies on several of NBC Learn’s original science stories, found in such celebrated collections as “Science of the Olympic Winter Games” or “Science of NFL Football.”

“We do a science starter every day. It’s like a class warm up,” said Tomm. “[The NBC Learn videos] are the right length to do for 5 minutes at the beginning the class. It gets their interest piqued.”

During a recent unit about chemistry, she depended on some of the videos from the Chemistry Now series.  These videos were created in partnership with the National Science Foundation and explore how chemistry relates to every day events and experiences, from chocolate, to dish detergent, to even our feelings of fright and fear.

“With our 7th graders, it is about recognizing chemistry around them,” says Tomm. “We do the Science of Cheeseburgers. It is kind of cool to see how many times they say ‘I didn’t know that. I didn’t think about that.’ We get to talk about all of the reactions and different compounds and how they all relate.”

The “Cheeseburger Chemistry” stories break down each part of a scrumptious cheeseburger, exploring the chemical processes that form the basis of the burger, the bun, the cheese, the tomato, the pickles, and even the condiments. Tomm’s students learn how yeast works to convert the starches and sugars in flour into carbon dioxide, also known as fermentation. They wrestle with how cooking a hamburger effects that structure of the myoglobin located within the meat. And they get to see how the process of making milk into cheese is the perfect example of a chemical change.

“We are a 1:1 school and all of the kids have laptops,” says Tomm. “With [“Cheeseburger Chemistry”], the kids got to watch the video they wanted to watch. In partners they created questions about the videos and they got to share what they learned. They would watch the video and try to teach it to their classmates. It was interesting to see how many things overlapped. How the same concepts kept coming up.”

Not only are the videos the perfect way to teach students about chemistry concepts, but they also serve as a way to help make Tomm’s lessons memorable. In fact, after watching the video about the chemistry of pickles, one of Tomm’s students had a unique reaction – the kind of reaction that Tomm is hoping to find in each of her lessons.

“One of the girls said that she would never look at pickles the same way again.”